A story for everyone

Posted on October 18, 2015 by karenwritesmurder

Looking out  into the world, writers and people will find a niche for whatever they want to write.  If there is not already a genre out there, one can be easily invented to fit their comfort zone.

For example, under the genre of general fiction. You will find the following sub genres: historical, mystery, romance, suspense/thrillers, science fiction, and fantasy and sometimes a hybrid of the two.  Each of those categories had her own set of sub genres to include, for example, under romance: historical romance, contemporary romance, romantic suspense and for those who like it really hot erotica.  All I forgot to mention paranormal romance which includes: shifters and people with telekinetic abilities and your garden variety vampire stories.

Let’s not forget our communities of lesbian, gay, bisexual and transgender romances and mysteries.  There really is something out there for everybody.

I happen to be a mystery writer. Although I have dabbled in romance and romantic suspense. All of my published work has been in the mystery genre.  Within that subset you find historical ministries, contemporary ministries with a heavier plot line and then you find your cozies which are light comical with no serious supply line at all.  They are friend to read.  I happen to write under the cozy genre.  All my plots are quirky and the characters are funny with a hint of attitude.  Each premise I write has been different. Even within the series (Laura and Gerry Series). I have made sure that none of the plots are cookie-cutter in nature.  Let’s break down each of my books.

Dead on arrival: the victim is found on Lauren’s living room floor dead from a shotgun wound.  Sure is that sound like a run-of-the-mill murder.  However, the reason he was delivered to Laura’s apartment was based on revenge because she rejected the killer romantically.  He continues to stalk her by phone and while she’s driving.

Over her dead body: this is a classic case of the woman scorned.  An elderly lady has been targeted by the much younger wife of a sugar daddy who has chosen senior citizen over his middle-aged wife.  She’s not having any of this , so she has one of her minions dispatch the poor octogenarian with a Louisville slugger and left to drown in her Shreddies.  You have to admit, this is not something you would find a James Patterson novel would you?

Daytona dead: there is a deadly driver mowing down people with a classic 40s Chevrolet.  These are not random victims.  The killer had an ax to grind with each person he kills.  Lauren actually gets in his way so she could be next. 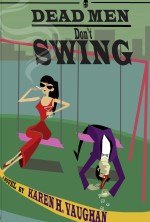 Dead men don’t swing: this is where the plot started to get really strange.  Swinging singles still exist.  This might be an old school kind of plot but I brought it back for this ministry.  The victim is a single guy who is mixing it up with a married woman in his apartment complex.  An argument ensues and hands up with the heel of a Jimmy Choo sticking out of his forehead and plummets to his death from the balcony right into a dumpster.  Once again I used the woman scorned plot when the killer doesn’t like to take no for an answer.

Jamaica dead: I also went strange for this one.  Our victim is an obnoxious boor with a secret.  Some of the criminal element catches wind as to what he really up to and plans to take him out.  It would’ve been easy for the killer just to shoot the guy and be done with it, but his boss. Once an unconventional method used.  Voodoo is the name of the game In this novel.

There are writers that don’t want to write steamy sex scenes and the stories they write are called sweet romances.  Inspirational writers will write stories either of a romantic or mystery by nature but contain a lot of faith.  Most are Christian and none of them have sex scenes.  It’s either because the writers themselves are more comfortable with that and still get their writing jam on.  The other reason could be that they are writing for specific group of people who aren’t comfortable with reading a lot of violence or sex.