STARK SEPTEMBER BY CD BRADLEY BOOK 1 OF THE STARK TRILOGY

Posted on March 20, 2017 by karenwritesmurder 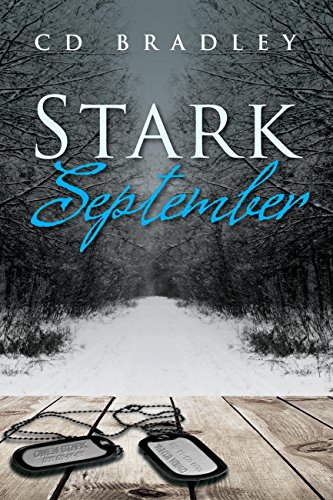 Sometimes it only takes a moment for your whole world to change. When Captain Kira Riley begins working on base at Fort Carson, she thinks she will be paying back her debt and escape her past. However just as she tries to focus on the mission at hand her path violently collides with the one man who could unearth every wall she has ever built. Kira had struggled for years to make it to this moment. Finally a physician! But for those from meager backgrounds dreams come at a price. In order to pay for school she would have to serve in the military for 4 years. Just being on base brings back a lifetime of painful memories. Kira has to focus, pull up her big girl panties and make this work. One problem, she never anticipated meeting Owen Stark, a Special Forces sergeant who lives by a strict code. Though Kira tries to avoid any thoughts of this rugged stranger, fate has other plans. After a steamy and awkward physical exam, Kira is left breathless and shaken. She has no intention of ever putting herself in a vulnerable situation again yet this soldier stirs feelings she didn’t know she had. Beyond fraternization, Kira will have to overcome; a slew of crazy exes, the grips of a BDSM subculture, and jail to find out who Owen Stark really is. Stark is intrigued from their first encounter but his world is set. After a decade of service to avenge past tragedy, his team was all he needed, until he met her. Her determination, wit, and gentle charm captivate him. Now he must choose between the existence he has built and a chance to really live again. Separated by their ranks she is the one woman he can never have. He knows being caught will end both of their careers. Aside from that if he gets too close she will learn about his life before the military or worse how he has spent his free time for the last decade. He knows he should just walk away, but one look in those innocent eyes and the world stops spinning. Some risks are worth taking even if you lose everything.

HOT! HOT!! HOT!!!, September 18, 2016
By
Ladyjovi72
Verified Purchase(What’s this?)
This review is from Stark September (Stark Trilogy Book 1) (Kindle Edition)
Last night I finished Stark September by C.D. Bradley. Talk about Hot, Hot, Hot!!!! This one will make clothing implode. I couldn’t put it down and had it finished in one day!
Stark September is a story about Kira Riley, a former military brat who has just embarked on her own military career as an officer and a doctor. Her first day in the clinic she is assigned to give a post-mission physical to the same man she literally ran into earlier in the morning. Owen Stark is a Sergeant in the Army and also a Special Forces soldier. He knows he can’t have a relationship with the hot doc giving him his physical but the attraction is strong, too strong to resist. The attraction between the Captain and the Sergeant is more prevalent than the rules they are both governed by and the relation quickly turns hot and heavy. They both have pasts they are running from but events keep throwing the past in their faces and threaten to pull them apart, and having to keep their relationship secret from the military just makes things even more forbidden and more dangerous.
This novel is a cliff-hanger but I do believe the second novel is releasing soon, at least I certainly hope that is will be releasing soon, and there will be a third novel. I will have my hands all over the second novel as soon as it is released. Another warning, there is some BDSM involved in this novel but not enough to put anyone off. There is just enough, I believe, to satisfy the BDSM fans but not so much to turn off the fans who are not.