Posted on May 7, 2018 by karenwritesmurder

THE LITTLE BROTHERS HAVE GROWN UP AND HAVE THEIR OWN TOWN. DAKOTA LIGHTFOOT IS NEW TO THE PRINCES OF PROPHECY. MOHEGAN, AND A SEER, DAKOTA CAN TELL WHEN SHIT WILL GET REAL FOR THE PRINCES AND THEIR WOMEN.  HE IS A VALUABLE MEMBER OF THE CLUB AND ENTERS INTO A RELATIONSHIP WITH JESSIE LAPONTE-JAMES AND JESS BAXTER. 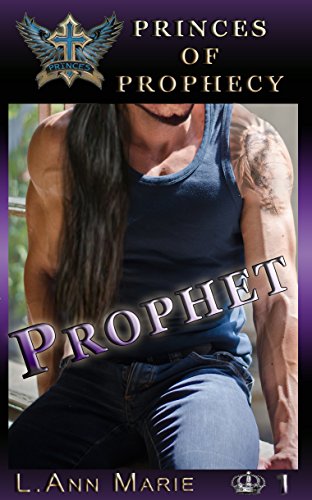 Prophet: Dakota has never known Brotherhood. A warrior and special abilities makes for a busy but lonely Dakota. Without the ability to sustain simple touch Dakota is weary but happily surprised by Jessie and Jess’s offer. Learning to live with a new partner and wife is easy compared to the Brotherhood that is offered through the Club.

This is a continuation from the MC Series. The Little Brothers are all grown up. I recommend reading the MC before this one so you have the background characters and information.
Raised by a father who is somewhat reserved, Dakota Lightfoot finds a whole new world when he is patched in to the Princes of Prophecy. With his abilities and natural leadership, he quickly finds his home with this new Brotherhood.
Jessie LaPonte-James has always known he would be part of a trio, much as his father, Danny, and Kate are, and always believed that Darren would be by his side with Jess Baxter.
But what happens when one of the three isn’t as in-tune with the plan as the others?
This is the story of Jess, Dakota and Jessie.

This is where we meet Dakota Lightfoot for the first time. He is Mohegan and a seer. Don’t hug him it will freak him out but he is a lovable character who fits nicely with Jessie and Jessica Baxter.  Another well told story by L.Ann Marie about the forming of the Princes of Prophecy the Rhode Island chapter of the MC.  You don’t want to miss this first installment of this new series featuring characters you love.  5 gold tattoos for Prophet.

PROPHET IS AVAILABLE AT AMAZON

I am a writer, blogger and radio host. I love to read and my love of books has lead me down this path. People tell me I write like Janet Evanovich. I take that as a compliment as I love her Plum books. I feel like Stephanie and Laura could be best friends.
View all posts by karenwritesmurder →
This entry was posted in L.ANN MARIE, O & P AUTHORS and tagged ACTION, FREAKY KID SKILLS, MC, NATIVE THEMES, PRINCES OF PROPHECY, ROMANCE. Bookmark the permalink.