ONLY A TRUE HERO CAN SHINE A LIGHT IN HUMANITYS DARKEST TIME! THE LAST TIMEKEEPERS AND THE DARK SECRET

Posted on December 16, 2018 by karenwritesmurder 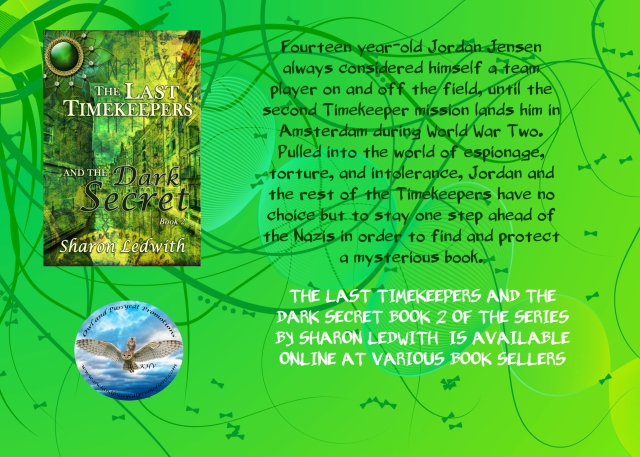 Format: Kindle Edition
I loved this new addition to the Timekeepers series. It wasn’t all fairytale driven, but touched on a critical, yet disturbing part of our history – WW2 and the Nazis. Again, the traveling group were a great cast of characters and interesting. I think Sharon has done an excellent job in building her characters. The scenes were action packed and you actually were afraid for the kids. I also liked the fact that there was some darkness to the story, not all “happyland”. And she touched on other subjects that a lot of middle and young authors are afraid to.

I believe the youth of today will benefit from stories that outline our jaded past and teach them that not all is roses and whip cream. How else do we learn if we don’t learn from our past?

I did enjoy it from beginning to end and would recommend this book for middle grade kids, and a few big kids as well! The history is welcomed and the story, however a reminder for is, is wonderful. 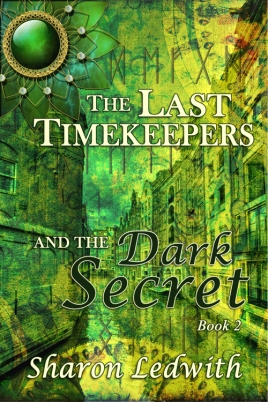 “I wonder what else is down here.” Drake beamed his cell phone across the basement, hitting jars of jams, pickles, and relishes. His stomach growled.

Jordan pulled the cheese from his pocket and handed it to Drake. “Trade you for your phone.”

“Best. Trade. Ever.” Drake passed his phone to Jordan.

Jordan walked over and grabbed a jar of pickles off the dusty shelf. At least they wouldn’t arrive at the baron’s place hungry. He hoped his uncle had managed to stop Amanda’s bleeding. His hand tightened over the jar, the ridges of the lid cutting into his palm. A scrape from behind the shelves made Jordan jump.

“Hello?” he asked, pushing jars aside. He flashed the cell phone into the small, dark area.

“Who ya talking to, Jordan?” Drake asked with his mouth full of cheese.

“Shhh, Drake.” Jordan listened. Hearing nothing, he shrugged and turned back around.

“I thought I heard—” Jordan stopped and pointed the phone at Ravi. His jaw dropped. “A-Are you serious, Sharma?”

Drake spat out his cheese, snorting with laughter.

“Is there a problem?” Ravi asked, tying the bowtie of his tuxedo.

“You look like a penguin with attitude!” Drake slapped his knee.

“Say what you want, but I’m glad we didn’t hit the cleaners on the way to school now,” Ravi replied, pulling down his sleeves, “or else I wouldn’t have these dry clothes.”

Jordan chuckled. Suddenly, he heard a door creak open, followed by heavy footsteps squeaking down the stairs. Panicking, Jordan stuffed Drake’s phone in his track suit jacket’s pocket and waved Drake over by the shelves. Drake slipped behind Jordan just in time, before the small light bulb above the bottom of the stairs clicked on. Jordan swallowed hard. There, staring directly at Ravi was a portly man in a blood-stained apron. Tufts of blond hair sprouted from the sides of his balding head. His brown trousers were pulled up past his waist, making him resemble an evil garden gnome. In one of his hands, he held a huge butcher knife, its blade flecked with blood.

Wielding the knife, the man pointed at Ravi. “Who are you?”

I am a writer, blogger and radio host. I love to read and my love of books has lead me down this path. People tell me I write like Janet Evanovich. I take that as a compliment as I love her Plum books. I feel like Stephanie and Laura could be best friends.
View all posts by karenwritesmurder →
This entry was posted in GENERAL INFO, O & P AUTHORS, SHARON LEDWITH and tagged FANTASY, LAST TIMEKEEPERS, TIME TRAVEL, YA. Bookmark the permalink.

1 Response to ONLY A TRUE HERO CAN SHINE A LIGHT IN HUMANITYS DARKEST TIME! THE LAST TIMEKEEPERS AND THE DARK SECRET