WHAT CAN TRENT PRITCHARD DO TO FIX THE FUTURE OF HIS TOWN? RED DIRT PARADOX GARY D. HENRY

Posted on December 1, 2019 by karenwritesmurder 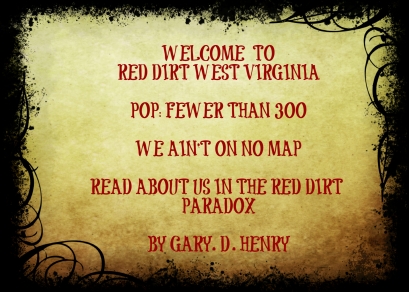 Trent Pritchard grew up in a small town in Central West Virginia called Red Dirt. The town of less than three hundred people was on no map. His father, Ben, ran a sportsman store supporting the town’s pastime of camping and hunting in the undiscovered forests surrounding the town. Trent’s father grew up with a group of friends affectionately named The Lost River Boys. Trent enjoyed his life until something evil crept into causing his parents and many deaths in the town. He need-ed the Lost River Boys’ history to untangle his present and future. The Kolb brothers were the worst kind of lawless rednecks. Together, they terrorized the town’s citizens.
The sons of the once beloved Randolph Kolb, they felt that they owned the town. Rape, murder, fights and overall evil permeated their existence. Soon, even their father couldn’t control his sons and in his advancing years, he feared them as well. When His parents were killed, Trent had enough and planned his revenge but when he was kidnapped and buried alive, he thought that all was lost but little did he know that it was just the beginning of a story that twisted time and events that happened and didn’t happen well before he was born, proved to be the only way to correct many wrongs. Follow Trent into worlds far away from his small town as he repairs the past to correct his future.

omg this book was amazing! had me confused at first to what was …

Format: Kindle Edition
omg this book was amazing! had me confused at first to what was going on. its about a town with five redneck boys who dont know how to follow the law. two people are not affraid of them and go aganist them. will they pay the price in the end? read to find out! thanks for giving me a chance to read this book!

I am a writer, blogger and radio host. I love to read and my love of books has lead me down this path. People tell me I write like Janet Evanovich. I take that as a compliment as I love her Plum books. I feel like Stephanie and Laura could be best friends.
View all posts by karenwritesmurder →
This entry was posted in GARY D. HENRY, GENERAL INFO, O & P AUTHORS and tagged DARK FANTASY, TIME TRAVEL. Bookmark the permalink.

1 Response to WHAT CAN TRENT PRITCHARD DO TO FIX THE FUTURE OF HIS TOWN? RED DIRT PARADOX GARY D. HENRY